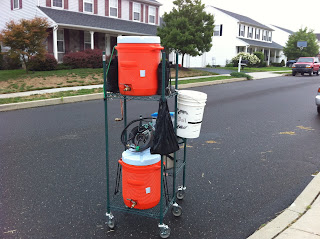 Well this weekend was a brewing first for me (actually quite a number of firsts).

Around 7am on Sunday I loaded up most of my brewing equipment onto a cart and pushed it up the street to my friend Vinces place. For a few months he had been talking about and working on obtaining a 55 gallon wine barrel. I have to admit when I first heard of the plan I was a bit skeptical but told him I would be in for helping fill it if he tracked down a useable barrel and was able to find the people to help fill it. Vince indeed tracked down a used red wine barrel from Manatawny Creek Winery in Douglassville, PA and organized for a group brew day.

Between a mix of 4 various all-grain brew systems we set out to brew 60+ gallons of a Belgian Blonde. Considering we brewed 60+ gallons of beer using a mix of the 4 systems the brew day went off without much of a hitch. A few moments of trouble shooting but considering the task at hand things went about a smoothly as we could have asked for. All said and done we had 45 gallons in a 55 gallon food grade plastic drum and 10+ gallons in two 14 gallon stainless steel conical fermentors in about 12 hours (also had most of the equipment cleaned up as well).

As for the recipe, each 10 gallon batch called for the following.

Yeast
Nate scored a huge pitch of what I believe is the Chimay yeast strain from Jean at Iron Hill Brewery in West Chester (they used it for a Belgian Quad).

Barrel
As for the barrel, we plan to check the gravity in a week or two and see where we are at. The barrel will be filled when the beer gets in the 1.015-1.020 range since we want to make sure there is still a considerable amount of sugar around for the wild yeast to do it's job. The wild yeast…basically a slurry that was grown up from some Russian River barrel chips.

I brewed another DIPA about three weeks ago. Forgot to post a blog about it, will get some info up on it if it turns out. Up next I plan to brew my Death Metal Russian Imperial Stout and Christmas Ale 2010 in September. 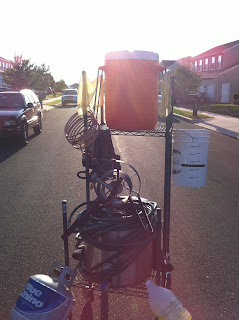