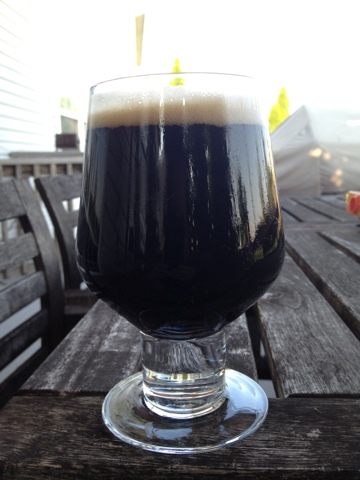 This whole Black IPA trend has been hit or miss with me.  Out of the handful of Black IPAs I have tried there have only been a few that I really enjoyed.  However after trying the Hill Farmstead Society and Solitude #2 I decided it was probably time for me to give it a go with the style.

I have been meaning to brew a beer with my friend Mike Ingrassia so after a few months of planning we finally figured out a brew day and set out to create a Black IPA.  Here is the recipe for an 11 gallon batch size.

Maltoferm A-6001 (added ~ 2 ounces right before kegging.  Boiled in 2 cups of water for a few minutes, cooled and added fermenter.  The original plan was to use Sinamar in the boil, however none of our local homebrew shops had it and Maltoferm was recommended to us after we had already brewed the beer)

Mash
Mashed around 149F for 60 minutes.  Added the carafa halfway through the mash.  So that was only in the mash tun for 30 minutes (was hoping to get the color but hold back on some of the roast).

Fermentation
WLP001 and WLP007 (1 vial of each with a starter)
Ferment at 68-69 F
Once fermentation slows down add first dry hop addition.
I drop my fermentation temp to 40F when it's time to transfer to a keg in order to drop out the massive amount of dry hops and the yeast.

Aroma -  Tropical fruits, orange rind and floral hop notes.  Hops are very up front with hints of caramel malt and the lightest hint of roast.  Some alcohol sweetness present in the nose, however it's not a hot or solventy type of heat.

Flavor - For an under 1.010 FG beer there is still some hints of sweetness but most likely from the alcohol.  There are hints of roasted malt (very slight) and some caramel malt but this beer is primarily dominated by the hops.  Mixed citrus notes, piney and floral.

Overall -  The efficiency of my system has been yielding higher starting gravity wort lately so while we set out to brew a Black IPA...this one ended up to be more of a Double Black IPA.  The color, hop aroma and roast/caramel malt notes were exactly what we set out for.  I would try to work the Sinamar or Maltoferm into the brew kettle the next time around like we originally planned to do.  I can't say that I specifically detect it in the final beer, however there may be a slight chalkiness there...and that could be adding to the sweetness that I'm perceiving as alcohol sweetness as well.  Either way I would recommend this Black IPA recipe to anyone looking to try out a slightly higher ABV Black IPA.  Maybe just lower the target ABV to 6-7% and use the Sinamar/Maltoferm in the boil kettle.