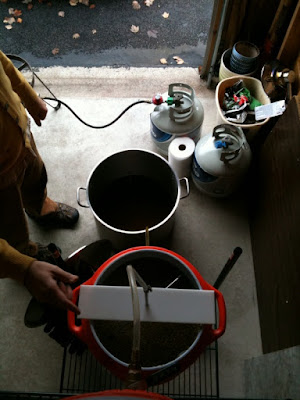 Jesse came up today and we got the Belgian Single/Sour split batched brewed and our two year old sour finally in bottles. The above picture is from our fly sparge for the Belgian Single. Our mash and sparge went well. We ended up fitting about 28 lbs of grain along with 8 gallons of water into my 10 gallon cooler mash tun. Our one hour plus mash started out around 152 degrees F and ended around 149 which is right around where we wanted to be. Our fly sparge took about 1 hour and used roughly 10 gallons of water, our pre-boil gravity came in at 1.063. 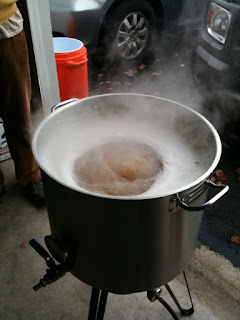 With the 10 lbs of Pilsner malt we decide to go with a 90 minute boil to burn off any DMS that might have stuck around with a shorter boil. The original recipe was based on a 60 minute boil so we held the bittering hops until 30 minutes into the boil and the only other adjust we had to make was to add some additional water to the boil at around 10 minutes. We didn't exaclty know how to go about making the calculations to make up the difference and just decided to wing it and go with adding an extra gallon of water. It turns out that decision was the right one since our OG ended up at 1.072 (I'll take it since our original target original gravity was 1.067). While this new Belgian Single was brewing we were also busy bottling the two year old sour along with two other sour beers that my friend Eric stopped by to bottle. I'll go into more detail about the 2 year old sour beer in a future blog post once it's all carbonated and I'm able to post some tasting notes.
We plan to ferment the Belgian Single in two seperate Better Bottle carboys. The "regular" version will spend about three weeks under temperature control (approx 68 degrees F) at which point we will bottle as long as we hit our target FG (roughly 1.016). The "sour" version will spend about a week in a Better Bottle carboy (primary fermentation) at which point we will transfer the beer into a glass carboy and pitch a vial of White Labs Belgian Sour Mix (WLP 655). It will remain in that glass carboy for at least a year if not longer. Here are a few more pictures from the day. 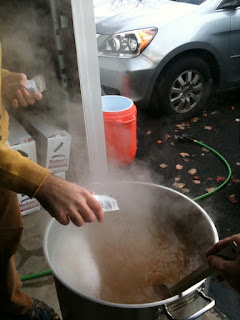 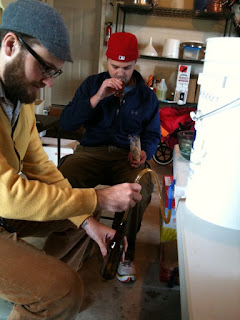 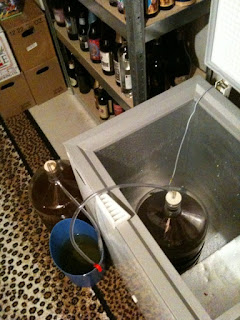