This Saturday I brewed the Belgian Wit that I wrote about in my previous blog post. This was the first time that I brewed an all grain batch 100% solo. I usually have someone or multiple guests stop by during a brew session, but not this time around. All in all things went well. This was also my first time brewing a beer in which over 50% of the grain bill was wheat or oats. I heard the "rumors" of stuck sparges with this amount of wheat/oats and thought I had planned ahead enough and introduced enough rice hulls into the mash to help avoid this. Turns out that was not the case. I struggled with a stuck sparge for about 30-40 minutes. Finally got things figured out, basically just stirred the whole mash about again and added more rice hulls. Hopefully the stuck sparge and time spent messing around with it doesn't have a negative impact on the finished product. 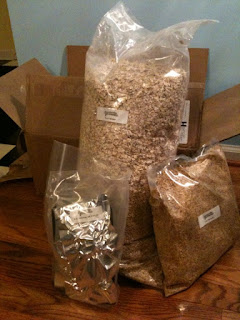 In my previous post I mentioned that I had ordered all my supplies from the Brewmasters Warehouse, a new online homebrew shop out of Georgia. I have to say I was very pleased with their service. The ingredients were ordered on a Saturday, they shipped on a Tuesday and the package was on my front porch when I got in from work on Friday. The ice packs were still cold helping to keep the yeast/hops at about fridge temps. This probably won't be the case in the middle of the summer but for this time of the year it seemed to work out well. Everything was packaged nicely in the box, appropriately labeled and ready to be used on brew day. I will be using the Brewmasters Warehouse in the future for sure.

As for the recipe, I kept it the same as outlined in the previous post, with one minor adjustment. As I mentioned before this beer was being brewed for my Dad for Christmas. He is a big fan of Wit beers and also really likes the orange notes in them. I decided to go a little heavy on the orange zest. About 2 ounce of freshly zested navel oranges went into this one (9 oranges).

One other thing to note. Since this my first time going solo on an all grain brew sessions, one other challenged I came across was transferring the wort from the brew kettle to the fermentator. I'll let the picture explain how I accomplished that. 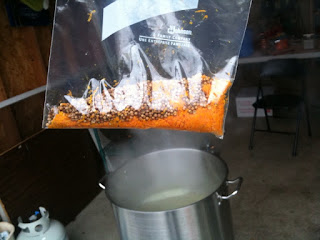 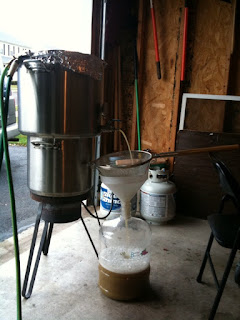