I have brewed this beer once or twice per year for the last 4 or so years...and I think I have finally settled in on a recipe...well except for the yeast and coffee which I tend to change from time to time.  Oh the hops too depending on availability.  Lately I have been using a Belgian Abbey Ale yeast. I like how the beer ferments out and I like the esters that are picked up when using this strain.  However it tends not to do as well in competitions because if I mentioned that it's an Imperial Stout...the esters throw the judges off.  But regardless I like the way the beer turns out and I think it adds another layer of depth to this beer as opposed to what the American strain imparted.  I also go with citrusy/piney American hops if at all possible.

I also realized that I never posted the all-grain recipe on my blog and have had quite a few people email me asking for an all-grain recipe.  The extract recipe is available in Sam Calagione's Extreme Brewing, A Deluxe Edition book that was released in 2012.  If you plan to brew this beer as an extract batch I would recommend you follow the recipe in the book and reference this recipe for any possible changes and also to incorporate any steps that you may be able to work into your batch.

Extras
1 Vanilla Bean with 7 days in fermentation (soaked in vodka over night before adding, pour vodka and beans directly into fermenter)

12 oz of course ground coffee beans – cold steeped in the fermenter for 24 hours. What I is coarsely grind the beans and put them into a sanitized hop bag. I usually boil the bags first in order to sanitize them. I have a conical fermenter that I’m able to control the temperature on and I drop it down to 42 degrees F in order to do a cold steep directly into the fermenter. I transfer out of the fermenter directly into kegs 24 hours after adding the coffee. This time around I used freshly roasted Asociation Primaveral medium roast beans from Oddly Correct Roasters out of Kansas City, MO. Thanks to Gregory Kolsto at Oddly Correct for offering up the beans! You can use your favorite locally roasted fresh beans. However what I tend to look for is the freshest beans that I can get my hands on.  I shoot for a medium roast or lighter roast that imparts milk chocolate, toffee, nuts, vanilla and some fruity notes.

Fermentation Plan
Ferment in 14 gallon conical fermenter. Allow to ferment for two weeks. Start at 68 F for close to one week. Then raise to 74F. After 2 weeks add vanilla beans for an additional week.

Coffee Plan
Crash cool fermentor down to 42 degrees. Drop out any yeast.

12 oz of coffee course ground locally roasted coffee as fresh as possible. Boil hop bags to sanitize. Fill hop bags with coffee and place into fermenter. Allow to sit for 24 hours and then keg the beer. 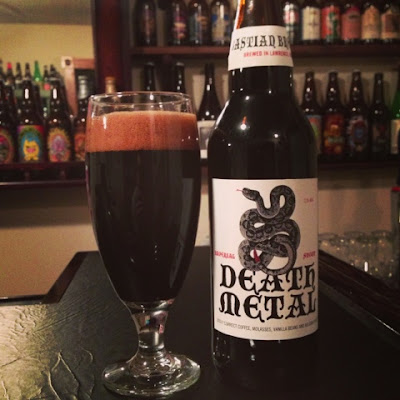