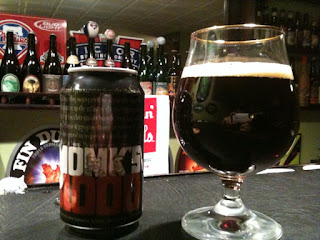 For any of you who know me (which is probably everyone reading this blog) you probably already know that I'm quite the fan of great craft beer in cans. I won't go on about my reasoning in this post but I will mention that I was very happy when the San Francisco based, 21st Amendment Brewery started sending their Brew Free or Die IPA and Hell or High Watermelon Wheat to Pennsylvania this summer. Just this past week cases of their brand new offering Monk's Blood have started to hit Eastern PA bottle shop and distributors shelves.

Monk's Blood is an oak-aged Belgian-style Dark Ale (along the lines of a Belgian Quad) brewed with cinnamon sticks in the mash, dark candy sugar, vanilla beans and dried black mission figs in the boil. It's packed in a nifty looking 4 pack box and is part of their new line of beers they are referring to as The Insurrection Series. The box states the following… “Legend has it that in the evenings, the monks would retire to their chambers & settle in with a few passages from the Good Book. But Brothers Nicolas and O’Sullivan had other plans. Working in the brewhouse all day, they were forced to repeat the same old recipes the elder monks had invented years before. They needed a little diversion. And found it in the cellar of the monastery with a fresh twist they put on the beer and the way they enjoyed it. Brother Nicolas (or Nico to his close friend) brought some hand-rolled cigars. O’Sullivan, the outspoken one, broke the vow of silence by spinning a remix of some Gregorian chants. Together, they’d throw down a couple nice hands of Texas Hold’Em and savor the handcrafted brew they created in secrecy. Everyday was good. Or so it seemed. But deep in his heart, Nico knew they were driving into the dark side of beer. Next thing you know they’d be skipping Lent. Then on night they’d face the Judgment for their actions with a hard knock at the door. Outside, the Abbots and elders would be holding stone in the air. A threat the brothers were sure would lead to the spilling of Monk’s Blood.”

Tasting Notes - Pours a deep ruby chestnut/amber with a medium bubbly off white head that left some lacing. Aroma of various fruits, dark fruits, vanilla, light oak, maybe a touch of the cinnamon, some fresh hop notes and chestnuts. Flavor of dark fruits, vanilla, oak, light cinnamon, figs, light roasted malt and some fresh hops poking through. This was well done. Not overly sweet or sticky, ABV well hidden and it’s in a can! 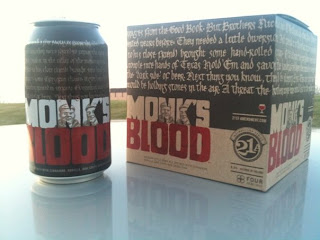