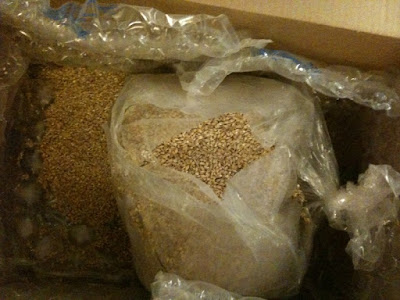 For my next batch of beer I plan to brew a big Double IPA. The beer is based on Russian Rivers Pliny the Elder clone recipes that have been floating around online in addition to the Double IPA recipe in Jamil Zainesheff's Brewing Classic Styles book. Actually the only real change up is some additional malt (resulting in higher ABV) and the use of the Amarillo in the dry hop.

For this batch I decided to order my supplies online through Northern Brewer. I have ordered from them in the past (mostly equipment and liquid malt extract) and have always been pleased with their service. They also have great catalogs and just seem like a really cool, well run company. Unfortunately when I received the order and crack into the box I noticed grain all over the inside of the box. This was certainly alarming and my original thought was that I would not be able to save enough of the grain to brew with. I had also ordered a ball valve and they didn't do so great of a job at securing it in the box resulting in the valve punching a huge whole in the bag that held 17 lbs of base malt. Luckily I was able to save most of the grain, I threw it on a scale and confirmed that I still had about 17 pounds of base malt. I did call Northern Brewer to let them know what happened. They appreciated the feedback, although I was hoping they would throw a gift certificate my way or something like that. Basically they just said thanks and that they were happy I was able to salvage the grain. It did make quite the mess all over our kitchen floor though…

Here is the recipe and brew day plan for the Double IPA. I plan to brew on Sunday December 20th so if anyone is around and wants go hang out in the garage/give a helping hand/drink some homebrews let me know. Would like to get things going around 9am.

Sparge
Fly sparge with 6 gallons of 200 degree water for close to one hour. 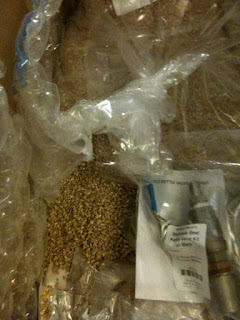