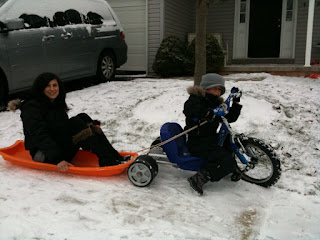 This weekend the Philadelphia area got what was the 2nd worst December snow storm ever since they started tracking that stuff (something like a 100 year record). Since I ordered the ingredients for the Double IPA online and already had the yeast starter going I had no other choice but to brew. It actually turned out to be a really great brew session overall and the snow really only impacted some of my cleaning and sanitation activities (I ended up cleaning the brew kettle inside and the mash tun probably didn't get as good of a cleaning as I usually give it, but it should be fine). 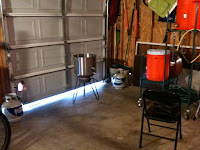 I got the brew day started around 10am. My winter brew house setup, while maybe not the "safest" certainly keeps me somewhat warm. I do take some safety precautions though, yes I make sure the garage doors are cracked and I also set up a carbon monoxide detector in the garage and ask Steph or Elliott to come check on my every so often. That system seems to work well so far. With using an outdoor burner in a garage and a propane heater as well, just want to make sure I don’t burn up all the O2. 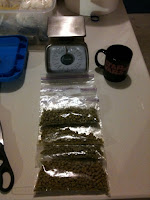 This recipe called for a total of 9 ounces in the boil so I decided to use hop bags for the first time ever and they seemed to work out well. The boil really kept the bags bouncing around in the brew kettle so hopefully I was able to get the same amount or close to the same amount of extraction out of them. The only snag I had was when I added the final 3 ounces at flameout. That hop bag opened up so I still ended up with a little bit of a mess in the kettle. As long as the beer turns out and I get the right hop aroma and flavor out of the beer I will probably start using hop bags for any of my beers which call for a heavy dose of hops. Thanks for letting me borrow the hop bags Vince, they worked well! 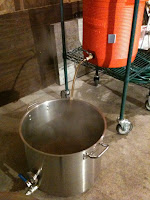 My target OG (at least based on the BrewPal iPhone app software) was 1.090. I ended up around 1.079 though, which put me at about 60% efficiency. I think I may have had a little bit too much water in the mash/sparge which turned out to be a good thing and left me with about 8 gallons of wort pre-boil. The recipe in Jamil's book actually calls for an OG of 1.080 so this beer should be just about right as far as the gravity and ABV goes (ABV should come in around 8.5%). The extra liquid in the kettle helped out since this was a 90 minute boil and there was a good bit of hop batter and break material in the bottom of the kettle after I chilled the work down. 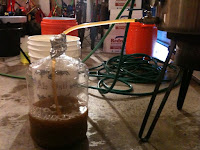 So the aroma and bitterness from this beer after the boil was complete was pretty amazing. The hop bitterness is very aggressive and will only be complimented by the alcohol and carbonation. Fermentation has begun and the blow off tube is aggressively bubbling. I currently have the fermentor set at 67 degrees and plan to slowly bring it up to 70 degrees to finish out the beer. I'm hoping to dry hop at about 7 days in and let the dry hops sit in there for about 7-10 days. 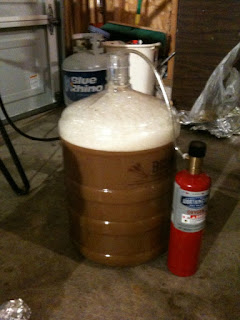