War of the Worts Summary and Results 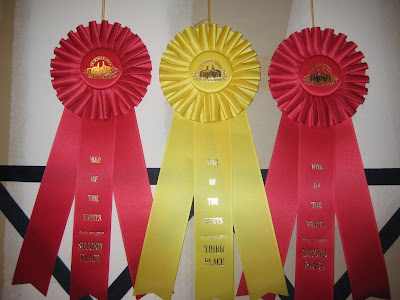 As mentioned in my blog post from Friday I had a few beers entered in this years War of the Worts XV homebrew competition and also helped out at the event as a steward. While it made for a long day, roughly 8am until around 8pm it was certainly as worthwhile experience. The competition had a total of 816 entries which were judged at 35 different tables made up of a total of 85 judges. I was one of probably 20 or so stewards for the day. Basically a stewards job is to make sure the beers get out to the correct tables, the judges have whatever they need and last but not least everything gets cleaned up, paperwork gets filed and organized and basically the event runs smoothly. I was on my feet all day and while it was close to a 12 hour day it certainly didn't feel that long (they certainly kept us busy). I have pictures from the event posted over here.
Here is how my beers faired. The results for the competition are posted here. Homebrew competitions judge beers on a scale of 1 to 50. The scoring guidelines are as follows: 45 to 50 is Outstanding, 38-44 is Excellent, 30-37 is Very Good, 21-29 is Good, 14 - 20 is Fair and a score of 0-13 is Problematic. It's very difficult if not impossible to score a 50 and anything over 35 is certainly a nice score.
Death Metal Imperial Stout – 13F Russian Imperial Stout - This beer took a third place out of 24 entries and finished with a final score of 42.5. I should note that this beer was brewed over a year ago with my friend Tom Giachero. Kind of crazy that a 42.5 took third place but that is how competitions like this go with the mini-best in show voting at the end for each table.
Pop's Winter Wit – 16A Witbier - This beer didn't fair so well. It ended up with a total score of 19 which obviously did not place. I didn't have high hopes for this one though since it finished out as a slightly higher ABV beer for the style and I felt had some fermentation issues. Oh well, good to get some feedback on it. There were 13 entries in this category.
Belgian Chocolate Stout – 16E Belgian Speciality Ale - This beer did not take a top three ribbon but scored a 34. This beer and the Cherry Chocolate Stout were brewed with my friend Jesse Keenan
Belgian Cherry Chocolate Stout – 16E Belgian Speciality Ale - This beer did not take ribbon either but scored a 38. There was a total of 40 entries in the Belgian Specialty Ale category.
Belgian Single – 16E Belgian Speciality and also entered it in 18D Belgian Golden Strong Ale - This beer scored a total of 37 points as a Belgian Golden Strong and took a 2nd place ribbon out of 31 entries. It received a total of 34 points in the Belgian Specialty category. One good thing about being a steward is you have the opportunity to listen in on some of the discussions that the judges have. At the Belgian Specialty table the judges ended up with around 6 beers in the final round where they determine the mini-best in show for that category (that is how the award the ribbons at each table). This beer made it to the final 4 and was thrown out at the very end. I knew they were discussing this beer since it was the only beer in that category which had Nelson Sauvin hops listed as the "specialty ingredient". It didn't sound like any of the judges were familiar with the hop and I think they weren't exactly sure why it was entered in the Belgian Specialty category. Plus it was up against a Flanders Pale Ale, a Saison which I believe had brett in it and Blonde with brett. I'm happy to have witnessed that mini-best in show conversation though.
Double IPA – 14C Imperial IPA - This beer scored a total of 39 points and placed 2nd out of 25 entries. I was beat out by my friend and co-worker Blake Morris. I also had the opportunity to listen in on the discussions between the judges at this table and spoke with one of the head judges at the table after the competition. It came down to two Imperial IPAs and there was quite a bit of discussion. Mostly around wether the more malty and "imperial" IPA or the more hoppy, citrusy, dryer IIPA should be awarded the blue ribbon. Well on this day maltier and bigger won out over hoppy, aromatic and dry. Congrats Blake, that was certainly an awesome conversation to witness and pretty amazing that it came down to our two beers. Was also fun going up to accept the 1st and 2nd place ribbon in the same category. The challenge is on for next year! Blakes Imperial IPA did score a total of 44.5 points, which I believe was one of the highest scores of the day. I still have a bottle of each in my fridge, might have to have a blind tasting soon before these beers start to lose their edge. Anyone game?
Posted by Tom Bastian at 11:00 AM